Mr. Dibble is a shareholder of the firm, and he is a member of the firm’s Employment Section, where his practice focuses primarily on defending employers in a range of employment matters. He is also involved in a broad range of litigation and commercial matters.

Mr. Dibble has experience representing both large and small companies at all stages of litigation, and his practice includes complex commercial litigation, general litigation, federal and state employment litigation, administrative agency practice, and advising on business and employment issues, including compliance with Title VII, the Americans with Disabilities Act (ADA), the Age Discrimination in Employment Act (ADEA), the Family and Medical Leave Act (FMLA), and the Fair Labor Standards Act (FLSA).  He also represents employers in cases involving claims of discrimination, harassment, and retaliation.

Prior to joining the firm, Mr. Dibble completed judicial clerkships at both the United States District Court for the District of Utah, where he clerked for Chief Judge Dee V. Benson, and at the Utah Court of Appeals, where he clerked for Judge James Z. Davis.  While clerking, Mr. Dibble gained valuable insight into both federal and state litigation, and trial and appellate practice.

Mr. Dibble maintains an AV Preeminent rating with Martindale-Hubbell, which is the highest rating awarded to attorneys for professional competence and ethics.  He has been selected for inclusion in Mountain States Super Lawyers (2017-2020) in the category of Employment Litigation and included on the list of The Best Lawyers in America in Labor Law – Management.  Mr. Dibble has also been selected by his peers as one of Utah’s “Legal Elite,” as published in Utah Business Magazine (2009-2012, 2016, 2018-2020). 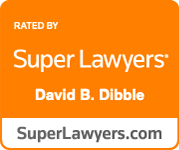