Mr. Savage has prosecuted and defended claims in the areas of catastrophic torts, real property, land use, construction defects, insurance coverage, transportation, contracts, tax, business torts (i.e. breach of duty, trade secrets, and fraud), intellectual property, securities fraud, product liability, financial institutions, and professional licensing. He has served as counsel in class action matters and obtained class certification in an action brought on behalf of the taxpayers of the State of Utah resulting in a substantial settlement. Mr. Savage represents the non-operating owner of the Crandall Canyon Mine and its operating agent with respect to claims and other matters arising out of events at the mine in August 2007.

Mr. Savage also represents clients in the area of franchise and dealership law. He has advised franchisors on the creation of franchise systems and on operational and compliance issues and has represented them in litigation. Mr. Savage previously served as counsel to two major vehicle manufacturers with respect to dealership and operational issues in the State of Utah. He was extensively involved in the creation and subsequent dissolution of the Utah Auto Collection. His practice now focuses on representing dealers and he represented a dozen dealers in arbitrations with Chrysler and General Motors after their dealership were terminated as part of these manufacturers’ bankruptcy proceedings.

In addition to his handling of construction defect litigation, Mr. Savage serves as Utah counsel for a national homebuilder. He has a wide range of experience in matters relating to real estate including development, leasing and acquisitions, and dispositions. His practice includes representation of developers in all phases of the development process (including acquisition, zoning, subdivision and development approvals), preparation of CC&Rs, construction and sales. He has assisted clients with the purchase and sale of retail projects, office buildings and industrial facilities. He has negotiated construction agreements and represented both landlords and tenants in connection with office, retail and ground leases. Mr. Savage represents property owners in condemnation matters.

From 1996 through 1998, Mr. Savage was a Judge Pro Tempore for the Third Judicial District Court. He served on the task force which wrote the Governmental Immunity Act of Utah adopted in 2004.

Mr. Savage has been annually recognized in Chambers USA in Litigation: General Commercial (Band 3). He maintains an AV Preeminent (5.0) rating with Martindale-Hubbell, which is the highest rating awarded to attorneys for professional competence and ethics. Mr. Savage has also been voted by his peers throughout the state as one of Utah’s “Legal Elite,” as published in Utah Business Magazine. 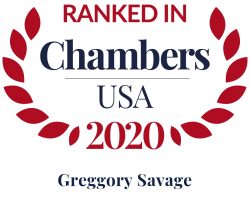