Mr. Jardine’s practice focuses on prosecuting and defending commercial litigation matters, and emphasizes complex business, antitrust, securities and intellectual property litigation. He has represented a wide variety of local, regional, and national businesses in major litigation in Utah and other states. Mr. Jardine is a member of the American College of Trial Lawyers, a former member of the Committee on the Local Rules of Practice for the District of Utah and former Chairman of the Litigation Section of the Utah State Bar.  He has been involved in a wide variety of community activities, including serving as Outside Counsel to the Salt Lake Olympic Organizing Committee, as a member of the Board of Regents of the Utah System of Higher Education, as Chairman of the Board of Trustees of the University of Utah and as a Governor of the Salt Lake Area Chamber of Commerce.

Mr. Jardine was named Outstanding Lawyer of the Year by the Utah Chapter of the Federal Bar Association for 2006. He was selected by the Utah Bar Commission as the recipient of the Bar’s Distinguished Lawyer of the Year award for 2005.  He is recognized in Chambers USA in Litigation: General Commercial (Senior Statespeople).  For nearly twenty years Mr. Jardine has been included on the list of The Best Lawyers in America© 2021 in Antitrust Law, Commercial Litigation, and Bet-the-Company Litigation.  He has been twice recognized by Best Lawyers as “Lawyer of the Year” in Bet-the-Company Litigation (2014) and Antitrust Law (2010).  He maintains an AV Preeminent (5.0) rating with Martindale-Hubbell, which is the highest rating awarded to attorneys for professional competence and ethics.  Mr. Jardine has also been selected for inclusion in Mountain States Super Lawyers (2007-2009, 2011-2020) in the categories of Antitrust and Business Litigation.  He was listed as one of the 2016 and 2018 Mountain States Super Lawyers Top 100 and has been twice recognized as one of Mountain States Super Lawyers Top 10.  These lists highlight attorneys who received the highest point totals in the Utah nomination, research, and blue ribbon review process.  Mr. Jardine has been voted by his peers throughout the state as one of Utah’s “Legal Elite,” as published in Utah Business Magazine (2004-2020).

Elections and The Political Process 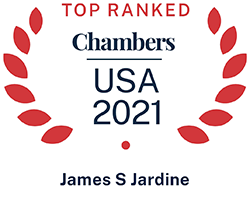