Jascha K. Clark is a shareholder in the Firm’s Employment and Labor Law and Litigation Sections. Jascha has extensive litigation experience and advises large and small companies on a wide-range of business and employment issues, including hiring, managing, and terminating employees in compliance with federal, state, and local laws, including compliance with Title VII, the Americans with Disabilities Act (ADA), the Age Discrimination in Employment Act (ADEA), the Family and Medical Leave Act (FMLA), the Fair Labor Standards Act (FLSA), and the National Labor Relations Act (NLRA).

Jascha defends clients against claims of discrimination, harassment, wrongful termination, and retaliation; advises on drafting and enforcing employment agreements and employment-related policies, including policies regarding the use of cannabis; and helps provide solutions to various labor relations matters, including collective bargaining, labor arbitrations, and unfair labor practice charges.

Jascha was selected for inclusion in Mountain States Super Lawyers (2019-2020) as a Rising Star in the category of Employment Litigation: Defense.

University of Utah, Honors B.S., Psychology with a Minor in Ethnic Studies, 2009 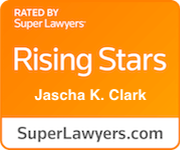