Mr. Toth is a shareholder, member of the firm’s Executive Committee and serves as the firm’s Business Development Director. He is the former Chair of the firm’s Litigation Section. Mr. Toth practiced law for six years for a global law firm in Houston, Texas before returning to Utah. Mr. Toth’s practice involves all types of commercial litigation with an emphasis on antitrust and unfair competition matters, including claims under the Sherman Act, Clayton Act, and Robinson-Patman Act. Mr. Toth’s clients include many of Utah’s largest publicly-traded and privately-held companies, including multi-national chemical companies, natural gas utilities, private equity funds, members of the health care industry and retailers. He has extensive expertise in counseling companies in establishing effective antitrust compliance programs, responding to subpoenas and inquiries from the U.S. Department of Justice, Federal Trade Commission and Utah Attorney General’s office. Mr. Toth also has a broad range of experience representing plaintiffs and defendants in product liability, toxic tort, medical malpractice, and premises liability claims throughout the country. He has represented manufacturers and distributors of automobiles, heavy equipment, medical devices, prescription drugs, sports equipment and other products.

Mr. Toth joined the Firm in 2002 after serving as Assistant General Counsel to the Salt Lake Olympic Committee where he managed a wide range of litigation matters, including trademark enforcement, licensing disputes, construction claims, and wrongful termination claims. He also now serves as legal counsel to the Salt Lake City – Utah Committee for the Games to bring the Olympic Winter Games back to Salt Lake City.

Since joining the Firm, Mr. Toth has been consistently recognized as one of the preeminent litigators in Utah by virtually every rating service, including the following: 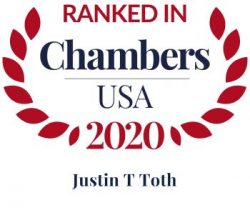 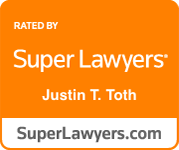