Mr. Thaler has been practicing law at Ray Quinney & Nebeker for 26 years since receiving both his undergraduate and law degrees from Duke University. He is a shareholder and director of the firm. His practice includes complex commercial litigation, general litigation, federal and state employment litigation, appellate litigation, trade secret litigation, tort and contract claims, administrative agency practice, fatalities and crisis management, and consultation with companies on a wide variety of business and employee issues. He has significant experience representing large manufacturers, airlines, mining concerns, oil companies, construction companies, national retail and hotel chains, winter sports related companies, and businesses nationwide in a number of other industries.

Mr. Thaler’s clients praise his judgment, strategic instincts, and creative problem solving skills. He also consistently receives excellent ratings in numerous peer reviews. He maintains an AV Preeminent (5.0) rating with Martindale-Hubbell, which is the highest rating awarded to attorneys for professional competence and ethics. In addition, he is regularly listed in The Best Lawyers in America© and was recognized by Best Lawyers as the 2021 Labor Law-Management “Lawyer of the Year.” He was voted by his peers as one of Utah’s “Legal Elite,” as published in Utah Business Magazine (2005-2020), and is listed among the top 5% of lawyers by Mountain States Super Lawyers, another peer reviewed process. Mr. Thaler has been recognized in Chambers USA in Labor & Employment. Various clients surveyed by Chambers USA report that Mr. Thaler is an “uncanny judge of character with an excellent ability for exacting the truth from people,” that “his knowledge of employment and labor issues is encyclopedic,” and praise his writing as “keen and concise.”  He is also one of only five attorneys in the State inducted into the Association of Ski Defense Attorneys (a group focused on defending ski resorts).

Mr. Thaler is the longest currently-serving member of the firm’s six-person Executive Committee, which oversees and manages all aspects of the firm’s business. He also currently serves as Chair of the firm’s Winter Sports Practice Group.

Mr. Thaler served two four-year terms on the Advisory Council for the Utah Antidiscrimination and Labor Division, which advises the Labor Commission and the Utah Legislature regarding labor and employment issues. Currently he is on the board of the Economic Development Corporation of Utah, a public/private partnership that works with state and local government and private industry to attract and grow competitive, high-value companies and spur the development and expansion of Utah business. 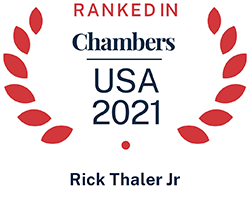 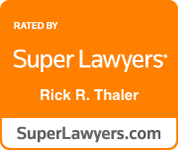