Sam Straight is a shareholder at Ray Quinney & Nebeker. His practice focuses on intellectual property litigation, including patent, trademark, trade dress, trade secret and copyright matters from pre-litigation enforcement through trial. He works with a wide variety of companies in protection of their intellectual property rights, and defense against claims of infringement. Mr. Straight also represents clients in other commercial litigation, including securities, shareholder derivative, real property, and appellate litigation matters. He also has extensive experience with litigation involving the direct selling or network marketing industry. Mr. Straight also has significant experience with all forms of alternative dispute resolution, including arbitration and mediation.

Mr. Straight is the Chair of the Firm’s Intellectual Property Section.

Mr. Straight maintains an AV Preeminent rating with Martindale-Hubbell, which is the highest rating awarded to attorneys for professional competence and ethics. He has also been selected for inclusion in Mountain States Super Lawyers (2007, 2009-2020) in the category of Intellectual Property Litigation. Mr. Straight was named one of the Mountain States Super Lawyers Top 100 and as one of the Top 25 Salt Lake City Super Lawyers (2013). These lists highlight attorneys who received the highest point totals in the Utah nomination, research, and blue ribbon review process. Mr. Straight is recognized in Chambers USA in Intellectual Property Law. He has been voted by his peers throughout the state as one of Utah’s “Legal Elite,” as published in Utah Business Magazine (2005-2020).  He has also been included on the list of The Best Lawyers in America© 2021 in Commercial Litigation, Patent Litigation and Intellectual Property Litigation and was recognized by Best Lawyers as “Lawyer of the Year” in Patent Litigation for 2017 and 2019. 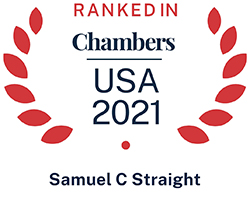 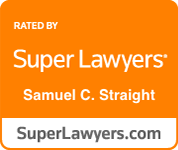