Mr. Hagen has defended numerous claims brought under the Employee Retirement Income Security Act of 1974 (ERISA). His cases have involved claims for benefits, wrongful discharge in retaliation for exercising rights under the Act, breach of fiduciary duty, and violation of ERISA disclosure duties. Mr. Hagen has also represented clients in audits conducted by the Pension and Welfare Benefits Administration of the U.S. Department of Labor. Mr. Hagen has significant experience defending clients cited by the Utah Division of Occupational Safety and Health, and federal OSHA.

Mr. Hagen has been recognized by Chambers USA in Labor & Employment (Band 1) and Employee Benefits & Executive Compensation (Band 1). For the past several years he has been recognized in The Best Lawyers in America© in Labor Law-Management and Employment Law-Management, and was named by Best Lawyers as Labor-Law-Management “Lawyer of the Year” (2018 and 2020).  He maintains an AV Preeminent (5.0) rating with Martindale-Hubbell, which is the highest rating awarded to attorneys for professional competence and ethics. Mr. Hagen has also been selected for inclusion in Mountain States Super Lawyers (2007-2020) in the category of Employment & Labor and has been voted by his peers throughout the state as one of Utah’s “Legal Elite,” as published in Utah Business Magazine (2005-2020). 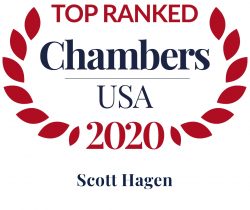