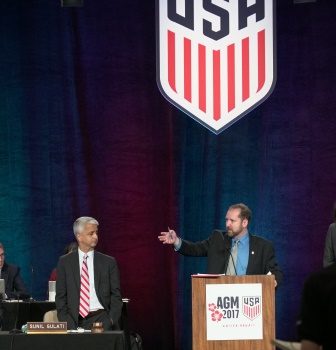 At the invitation of U.S. Soccer President Sunil Gulati, Paul C. Burke presided over the New Business portion of the 2017 Annual General Meeting of the United States Soccer Federation on March 4th in Wailea, Hawaii. With Mr. Burke at the podium, the membership of U.S. Soccer approved what Mr. Gulati had described as “a complete revision of our bylaws,” culminating a two-year project.

Mr. Burke currently serves as the Chairman of the Rules Committee for the U.S. Soccer Federation. The Rules Committee worked closely with the Federation’s Board of Directors as well as with outside counsel and independent consultants to develop the new set of bylaws for soccer’s national governing body. Changes were made to reform and improve the Federation’s governance so that U.S. Soccer will stand as a model for national soccer associations around the globe.